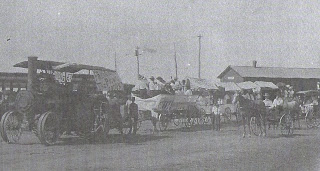 by John H. Bates
Time marched on and Goree grew. By 1920, we had three cotton gins, two theaters, and any number of business houses. The town had organized a band and a three day July 4th picnic had started when the first note came from the band pavilion.

Another highlight of yesterday was when Mr. Bill Glenn, of the County Seat came to asses taxes. Mr. Bill would drive up to our place late in the afternoon, in his new Model T that had cost at least $400.00 and my mother would make a dash for the milk cooler for a pitcher of buttermilk. Mr. Bill, the tax assessor, would come in, shake hands all around, and drink that pitcher of buttermilk, regardless of the size of the pitcher. After supper, the very thing we are discussing would begin. The early days on Knox prairie and do you remember when? I heard enough of it to last a lifetime, or so I thought, but here I am, a half century later, trying to tell something I heard long, long ago.
Posted by Tammie at 1:55 PM