Just wanted to drop you all a quick note and ‘officially’ announce that the school in Goree has been donated back to the City of Goree for public use. We appreciate Robert Dillard and the School Board for their cooperation and for giving us the opportunity to better our hometown.

If we do not utilize these facilities, then the upkeep, insurance and maintenance could hurt rather than help us. A Townhall Meeting is in the making. Thank you for your continued support and ideas.

We are excited to say the least!
Kent Trainham
Posted by Tammie at 7:07 AM No comments: Links to this post

Born June 24, 1944 in Elk Rapids, Michigan, Gary was a son of Joseph Nemec and Lena (Bolts) Kortanek. He was a U. S. Air Force and Army Veteran. Gary married Joyce Beaty on September 7, 1968 in Goree, TX. and was employed by U-Haul from 1985 to 2002. He was a self employed small engine repairman and a Baptist.

He was preceded in death by his parents. 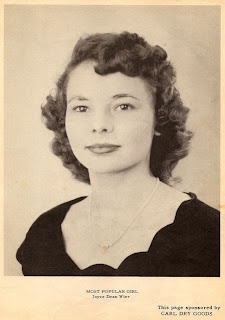 Joyce Dean Wier Therwhanger passed away September 20, 2009 at Legends Health Care in Midland, Texas. She was born August 23, 1932 in Knox City to Dean and Claudia Wier. She was raised on a farm in Munday and went to school in Goree. She attended Midwestern University in Wichita Falls and was a member of the First Baptist Church of Munday, Texas. She married Billy H. Therwhanger on October 27, 1950.

Graveside services were held Tuesday, September 22, 2009 at Johnson Memorial Cemetery in Munday, Texas with Jim Limbacher officiating. The family would like to express their sincere appreciation to the staff at Legends Health Care and Hospice of Midland for their loving care of Joyce during her illness. Arrangements are under the direction of Ellis Funeral Home. Condolences may be offered atwww.ellisfunerals.com
Posted by Tammie at 7:18 AM No comments: Links to this post