by John H Bates
In 1933, my father, Ross Bates, wrote the story of W.M. Gulick, Steve Franklin, and Will Cartwright who took a bunch of horses to Houston County, near Crockett, Texas and traded them for cattle. In the fall of 1879, Mr. Gulick and Mr. Calthrop brought the cattle through Seymour and up the Brazos to the mouth of Lake Creek and turned them loose. They established a camp and stayed together that winter. Calthrop’s father and family moved to the camp and built a house where Lake Creek empties into the Brazos. Mr. Gulick worked for the Millets and Bill Irvin, a partner of the Millets during 1880-1881, and then for the Hash Knife until 1883, when he married Miss Mary Jane Calthrop, a sister of Ham Calthrop.
Posted by Tammie at 6:50 AM No comments: Links to this post

W. Heard Reeves passed away peacefully on December 17, 2007, at the age of 91. He was born to Victor M. and Alma G. Reeves on November 16, 1916, in Goree, Texas. He grew up on their farm in Knox County, and graduated from Goree High School in 1934 as Valedictorian. He moved to Wichita Falls in 1938 to attend Draughon’s Business College. He married Jeanette Moore on December 22, 1942, and they were married 39 years. He became a member of First United Methodist Church in June of 1946. He was a longtime member of the Keystone Class of that Church.

Mr. Reeves was drafted into the military in January 1941 and attended Infantry OCS. He served in campaigns in North Africa, Sicily (Anzio), Italy, southern France, Central Europe, and the Rhineland, at the end of the Sicilian campaign he was one of the two 2nd Lieutenants chosen to go to Division Headquarters in Trappani, Sicily, for a conference with Gen. George S. Patton regarding infantry tactics in frontline combat. As a member of the Third Infantry Division, he knew and fought with Audie Murphy. He pinned 2nd Lt. bars on Murphy at Remiramont, France, to give him a battlefield commission. During his military service, Reeves was awarded the Silver Star, the Combat Infantryman’s Badge, a Purple Heart, two Bronze Stars, the French Croix de Guerre with palm, and several Distinguished Unit Citations.

Mr. Reeves was employed for 31 years by Perkins-Prothro Company as office manager and head accountant, He was active in North Texas Oil and Gas Association, a charter member of North Texas Oil and Gas Association Accountants, and served several years as Chairman of the North Texas Ad Valorem Tax Committee. He also served on the Official Board of FUMC in various capacities and on the Salvation Army Advisory Board. His quick wit and sense of humor will be greatly missed.

In lieu of flowers, please make donations to the First United Methodist Church, Presbyterian Manor, of Hospice of Wichita Falls.
Posted by Tammie at 7:42 AM 1 comment: Links to this post

Let us try to draw in our own minds a picture of these hardy souls. For most, they were originally from Iowa, Kentucky, Tennessee, Missouri and Georgia. A good portion of them had stopped over for a few years after leaving the states of their birth, in what we now call East Texas, comprising the counties of Denton, Collin, Dallas, and others. They had grazed their ponies and cattle on knee high grass from lush green valleys of their native states. This tall grass was strong enough to enable them to break their horses at three years of age, but the grass in this new land was an “Indian pony” of a different color. Here it was a short desert grass and their first thoughts weren’t good; however, they soon had a pleasant surprise. The short grass has a high protein content, and a colt at two years old was strong enough without corn or other grain supplement to begin doing a full day’s work. So, we really begin our story in the year 1879.
Posted by Tammie at 10:16 AM No comments: Links to this post

by John H. Bates
But, before we dwell any longer on the history of the present Goree and its surrounding communities, I think it is imperative that we go back at least two decades and possibly a quarter of a century to the era when the first settlers made their first campfires on a strange prairie; inhabited by tens of millions of prairie dogs, rattlesnakes, and coyotes. To the new arrivals it was a veritable sea of land, stirred only by a gentle wind, an occasional “dust devil”, the hallow sound of a buzzing rattler, and the plaintive cry of a lonely coyote. These new settlers were men and women born of hardship, blessed in a belief of an Almighty God, and graced with a determination to carve for themselves, from this boundless prairie, a place in history. To achieve this they had only their work-worn hands, their horses, sulky plows, and for the most of them a few head of longhorn cattle. Their work began with first filing their land claims and the diggings and constructing of what was known as half-dugouts. These first Knox County homes were located as near as possible to water, for we must remember these people were settling on the edge of the desert, and acknowledgeable water was as scarce as the proverbial hen’s teeth. They were truly in the short grass country.
Posted by Tammie at 8:05 AM No comments: Links to this post

History of Goree, Part I

The little town of Goree is situated in the southeast corner of Knox County about three miles west of the Baylor County line and approximately the same distance north of the Haskell County line, on a three hundred and twenty acre land grant given by the late E.M. Coffman (Uncle Ebb) and W.W. Coffman. From the data I can get, the first plans for the township began in 1905, or as soon as it was ascertained that the railroad would be built through the present site of the township. The railroad came through in 1906; therefore, we might say that 1906 was the birth of the present Goree. Anyway, 1906 was the beginning of the incorporated town of Goree.
Posted by Tammie at 3:38 PM No comments: Links to this post 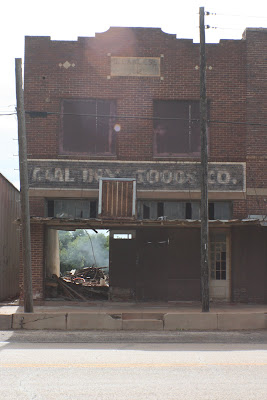 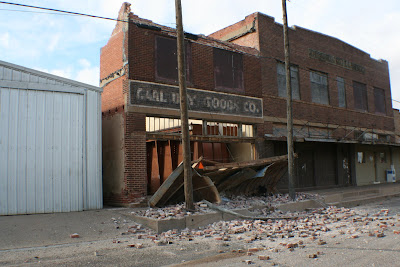 Well, three steps forward and a few more back! On Saturday a wind crashed through town and so did the brick from this building. The building had been partially demolished for the brick which may have weakened the structure. About 8 feet of bricks seemed to have landed on the awning causing it to fall and brick peppered the street. We hate to see this pretty building go--but we won't give up!

Posted by Tammie at 3:45 PM No comments: Links to this post