SEYMOUR — Mary Elizabeth Martin, 93, died Friday, July 20, 2012, in Seymour.
Funeral services will be at 2 p.m. Sunday at the Seymour Church of Christ with Lee Skelton, minister of the Church of Christ, officiating.
Burial will be in Henson Cemetery under the direction of Seymour Memorial Funeral Home.
Mrs. Martin was a homemaker.
Survivors include four sons, John Mark Martin of Lubbock, Stephen Paul (Chip) Martin of Anson, Phillip Andrew Martin of Sugarland and David Forrest Martin of Mansfield; nine grandchildren and seven great-grandchildren. 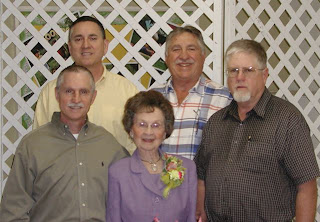 Visitation 6 this evening at the funeral home.
Posted by Tammie at 9:22 AM 1 comment: Links to this post 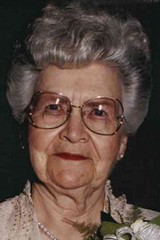 HASKELL — Virginia Dare Land most recently of Haskell, but longtime resident of Goree, passed away Tuesday, July 3, 2012 in Haskell. She was 94. Graveside services will be held at 10:00 a.m., Friday, July 6, 2012 at Goree Cemetery in Goree with Dr. Troy Culpepper officiating. Arrangements were made under the direction of Smith Family Funeral Homes.

Virginia Lain was born in Parker County, Texas on January 18, 1918 to parents, William and Mary (Murphy) Lain. She married John Arnold Land on December 19, 1936 who preceded her in death. She lived most of her life in Goree and was a clerk at Carl Dry Goods for over 30 years. Mrs. Land was a member of First Baptist Church in Haskell.

Also preceding her in death is her second husband, Howard Reding, whom she married October 25, 1991. Additionally, are her parents, William and Mary Lain; a sister, Nina Morton; 5 brothers, Fred Lain, Homer Lain, Leroy Lain, and 2 that passed at infancy.

Online condolences and memories can be left for the family at www.smithfamilyfh.com

Posted by Tammie at 7:25 AM No comments: Links to this post