In 1891, Dr. J.R. Smith, a native of Kentucky came to what we today call “Old Goree” and opened an office. Dr. Smith practiced medicine there and over a larger territory until 1907, when he moved to Munday. He became a large land owner and was truly a frontier doctor. He passed away at his home in Munday in 1926.

Dr. Heard was born in Marietta, Georgia on April 21, 1878. He graduated from Georgia Medical College in Atlanta in 1902 and came to “Old Goree” in March of 1903. He married Miss Sidney Parks in 1904 and made Goree his home. Dr. & Mrs. Heard had four children; Pete, who died in early manhood; Mary Isabelle, who is now Mrs. Temple Dickson of Sweetwater; Angie, who is now Mrs. Hill Ritcher of Dallas; and Charles of Abilene.

Dr. Heard lived to be 81 years in history, according to the good he did his community, none could have been more wisely spent. Those in Dr. Heard’s family are my friends and without these grand people the history of our community would not be nearly as interesting.

Dr. W.M. Taylor was born in Rock Mills, Alabama on July 28, 1887. He moved with his parents to Atlanta, Georgia. He was educated in the Atlanta public schools and graduated from the college of Medicine and Surgery in 1902.

He was converted and joined the Baptist Church at the age of 15. He began the practice of medicine in Newton County, Georgia.

Dr. Taylor passed away on December 7, 1960, at the age of 83; thus ended the life of an exceptional man because of his rugged honesty, his sincerity of purpose and his sympathetic understanding. He must have been high on God’s list of a chosen child. No man deserved more praise as a man, a physician, a Christian and friend than Dr. W.M. McEwin Taylor.
Posted by Tammie at 8:14 PM No comments: Links to this post

Mr. Coffman was born May 29, 1932, to longtime Knox County residents Ruth (Duke) and Buster Coffman in Goree, Texas. He married Joyce Brockett in Goree, Texas, on April 17, 1954, and they had just celebrated 54 years of marriage. Mr. Coffman was a good neighbor and friend to everyone he touched. A great sense of humor he loved being with all his golfing buddies. He was very active in his community serving on the Goree Producer Gin Coop and the Goree School Board for over 20 years. He also served proudly as a director for the First National Bank of Munday until his retirement in 1998. Mr. Coffman graduated from Goree High School and attended Cisco Jr. College on a football scholarship, and attended Texas A&M also. He was a farmer and rancher in this community for over 50 years. His greatest passion was his grandchildren and he loved going and watching his grandchildren play basketball and other sporting events.

Funeral services will be Thursday, April 24, 2008, at the Munday First United Merthodist Church at 2 p.m. with pastor Gary Hubbard and Adrin Fletcher officiating under the direction of the McCauley-Smith Funeral Home of Munday. Interment will be in the Goree Cemetery in Goree, Texas.

He was preceded in death by his parents.

He is survived by his wife Jo, his Son Mark Coffman and wife Darla of Midland, Daughter Cathy (Coffman) Reeves and husband Bobby of Lubbock, Grandson Kristopher Reeves and Wife Tiffany of Monroe, La., Grandsons Riley and Grant Coffman of Midland. Granddaughter Courtney Reeves of Lubbock and Great-Granddaughter Laken Coffman of Wichita Falls. Also surviving by a Sister Carol Stovall and husband Jimmy of Midland and numerous nieces and nephews.

(Correction to survivors: Drew and Jordan Coffman both of Wichita Falls.)
Posted by Tammie at 6:13 AM 1 comment: Links to this post

Just learned that Don Coffman passed away yesterday. More details to come...
Posted by Tammie at 8:15 AM No comments: Links to this post

Some memories from Keith...

Some time ago, Reba sent me an email to add her Aunt Sunny to my Goree Email Group List. I called Reba on the phone and told her that I didn't remember an Aunt Sunny and asked who she was. Reba explained to me in a round about way that Aunt Sunny was her mother's (Tennie "Thornton" Tynes) sister. She finally mentioned "Eunice Thornton", duh, then I knew who we were talking about. Eunice is a first cousin to my Mother.

AT times like this we don't always get everyone included in an obituary. The newspaper obituary for Reba didn't include Aunt Eunice 'Sunny' (Thornton) Tackett. From what I understand, Aunt Sunny and Reba, along with Reba's sister, Jeanie, are very close. Aunt Sunny was present (I'm guessing age about 13 or 14 then) when Reba was born a little over sixty-seven years ago. 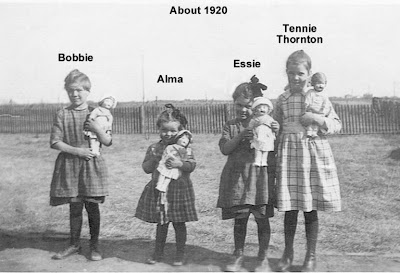 This is one of my favorite pictures from the olden days that some of you might enjoy. Reba's and Jeanie's Mother, Tennie (Thornton) Tynes is on the right in the picture.
Posted by Tammie at 4:24 PM 2 comments: Links to this post

Reba Tynes Redder
Tuesday, April 15, 2008
Reba Tynes Redder, 67, passed on from this world on April 13, 2008, in the Round Rock Medical Center, after a short battle with cancer.
She was born Sept. 8, 1940 to Mack & Tennie Tynes in Goree. She graduated from Goree High School in 1958 and attended Nursing School at TWU.
Reba married Reinhart (Rhiney) Redder on Jan. 30, 1961 in Rhineland. They were blessed with 47 happy years of marriage. The pride and joy of her life were her two sons, Ron Redder of Austin and Rickey Redder of Munday. In addition to being a housewife, she volunteered for 15 years on the Munday Ambulance Service as an EMT Special Skills and responded to over 1,000 Ambulance calls for the community. Reba was a CPR instructor and taught CPR to area elementary school students. She was a scout leader and delighted in generously giving of her time to help those in need. Reba and Rhiney hosted two exchanged students from Germany, Ron and Willm Patalla. Reba enjoyed communicating with people around the world through the internet. She and Rhiney are members of St. Joseph’s Catholic Church.
She was preceded in death by her parents and is survived by her husband, two sons, four grandchildren, one sister Jeanie Turek, and several nieces and nephews.
A Rosary will be at 6 p.m., Tuesday, April 15, 2008. Services will be held at St. Joseph’s Catholic Church in Rhineland at 2 p.m. April 16, 2008 with Deacon Ben Vasquez officiating. Burial will be at St. Josephs Catholic Cemetery under the direction of McCauley-Smith Funeral Home in Munday, Texas.
Posted by Tammie at 4:19 PM 1 comment: Links to this post 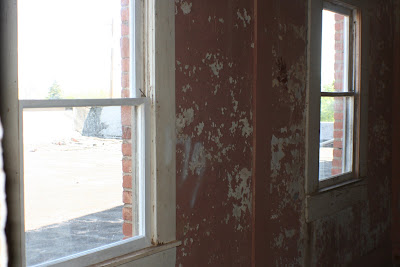 Windows are being repaired!
Posted by Tammie at 9:20 AM No comments: Links to this post

Wouldn’t it be wonderful if there was a website that showcased the many hunting opportunities available in Knox County? The KCVG, Knox County Visioning Group, is starting a FREE new service: “HUNT KNOX.” The KCVG wants Knox County to stand out above the rest and to be a ‘go to’ county for hunting recreation, thus helping our county’s economy.

We want to connect landowners and hunters by utilizing the “Hunt Texas Online Connection”. There are two ways in which we can do this: 1) If a landowner or leaser has access to the internet, then we can provide them with the information needed to complete an online login and post their lease –or- 2) Our team will enter your information on the computer for you and filter prospective lessees. For more information contact Caroline Garcia or Tammie Trainham at the City of Goree, (940) 422-5306.
Posted by Tammie at 6:45 AM No comments: Links to this post 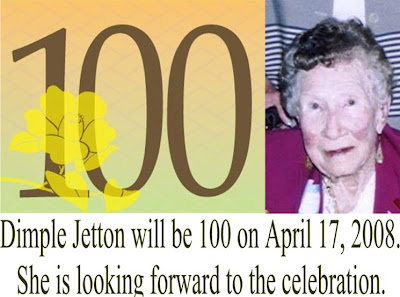