This Saturday on October 3rd

Plans are for a full day of Praise and Worship Music, beginning at 10 a.m. until 10 p.m. Participation is from Goree and surrounding communities, churches and all age groups. Bring your lawn chairs.

Bands, singers, dancers, vendors, food, kids' activities and a Kingdom Play are slated throughout the day.
Posted by Tammie at 8:06 AM No comments: Links to this post

Services will be 2 p.m. Thursday at the Munday First Baptist Church with Dr. James Heflin of Abilene officiating. Burial will be in the Goree Cemetery under the direction of McCauley-Smith Funeral Home of Munday, Texas.

Mrs. Butler was the activities director for the Munday Nursing Center.

Survivors include husband, Dick Butler of Goree, Texas; one daughter, Traci Blair of Munday; one brother, Dan Hayley of Winnsboro, Texas; one grandson and three great-grandsons.

Visitation will be 6-7 p.m. today at the funeral home.
Posted by Tammie at 8:04 AM No comments: Links to this post

David Kuehler of the North Texas Municipal Water Authority brought before the Council the fact that there will be a November 3, 2009 election concerning NCTWA's authority to continue as a taxing entity. He stated that this is not a new tax and they only want to have the authority to continue with the same tax, but add a cap of .10 per 100 gallons to the amount they are eligible to tax. He supplied supporting documentation which indicated the advantages and disadvantages to our citizens. It will save our citizens money, if this election passes.

There are many important congressional propositions on the ballot that effect cities, also. For more information see a Voters' Guide at City Hall. Don't forget to vote!
Posted by Tammie at 7:59 AM No comments: Links to this post

Imogene Morton Leflar passed away in Roswell, NM. She was raised in Goree and graduated with class of 43.

Imo, as she was called by her family, or Jean, as she was known by her friends, was a wonderful wife, loving daughter, sister, aunt, and most of all mother and grandmother. Her most avid hobby was antique and treasure hunting which she called “going antiquing”. She collected all different kinds of treasures and became known for her beautiful home, as she had a god given talent for decorating. Through the years, she refinished her own antique furniture and decorated her beautiful home with many antiques and treasures. Friends and relatives began asking her to refinish their furniture as well as decorating their homes. Her home and treasures were her life’s passion next to her children and family.

She and her husband Welton, were married on March 31, 1946 and lived in Munday, TX. They raised their three children there. Welton was a farmer and she was a homemaker. They lived in the same house in Munday for 51 years until 2005, when they moved to Roswell, NM to be close to their daughters, Kelly and Sammye. She lost her beloved husband, Welton to cancer on April 23, 2008. She was also preceded in death by her parents, James C. and Sudie Dora Morton and all 15 brothers and sisters. She was the last living child of 16. She has 7 grandchildren, all boys as well as numerous nieces and nephews that loved and adored her!

Please join the family in a celebration of her life. Graveside services will be at 10 .m. on Saturday, September 26, 2009 in at Johnson Memorial Cemetery in Munday with a visitation 6-8 p.m. Friday evening, September 25, 2009 at McCauley-Smith Funeral Home, Munday.

Anyone who knew her will understand why God wanted her as an angel. She has forever left her mark in the lives of many and she will be so dearly missed on this earth, but has moved on to be with her parents, siblings and husband in a better place. She hurts no more.

(This is husband of Martha Ann West.)

George "Pete" Vletas, 78, life-long resident of Abilene, died Friday, September 18, 2009 at his home. Funeral services will be at 2:00 pm on Tuesday, September 22, 2009 at the Church of the Heavenly Rest, Episcopal. The Rev. Mary Glover, The Rev. Bill Wright and The Rev. Roz Thomas will officiate. Burial will follow in the Cedar Hill Cemetery. The family will receive friends on Monday from 5:00 to 7:00 pm at The Hamil Family Funeral Home, 6449 Buffalo Gap Road.

November 11, 1930, Pete was born in Abilene, Texas to George Dimitris Vletas and Irene (Thomas) Vletas. He graduated early from Abilene High School in December of 1947. From 1948 to 1951 he attended the University of Texas. He then attended The University of Houston. He lettered in Tennis both at the University of Texas and Hardin Simmons. In August of 1951, Pete joined the United States Navy. He served during the Korean Conflict before being honorably discharged on August 30, 1959.

Pete returned to Hardin-Simmons and graduated with a degree in Geology and Math. He was a Geophysicist and Geologist by education, and after college graduation he was employed by Pan American Oil Company and briefly by National Geophysical in Wyoming.

He managed Mack Eplen Restaurants in Abilene for eight years, and later worked at West Texas Coffee and Equipment, before going into the business for himself. Pete is best known for continuing the Vletas candy making tradition founded in 1912 by his parents, George and Irene Vletas. He owned Vletas Enterprises, which evolved into Candies by Vletas, located at 1201 North 1st Street in Abilene.

October 1, 1966, he married Martha Ann West in Abilene, Texas. Martha taught school at St. Johns School and began working with Pete in the 90's at Candies by Vletas. They both retired from Candies by Vletas in 2001.

Pete was a member and past president of the Cactus Lions Club and a member of the Texas Restaurant Association. He was also a member of the Church of the Heavenly Rest, Episcopal. Pete was a kind and generous person who did many good deeds for others that were never known.

Preceding him in death were his parents, one daughter, Kelly Vletas and two brothers, James and John Vletas.

Memorials may be made in Pete's honor to the Church of the Heavenly Rest, Episcopal, 602 Meander, Abilene, Texas 79602; Young Life of Abilene, 1917 South 6th Street, Abilene, Texas 79604; or to the charity of your choice.The obituary and guestbook may be viewed and signed online at:www.HamilFamilyFuneralHome.com 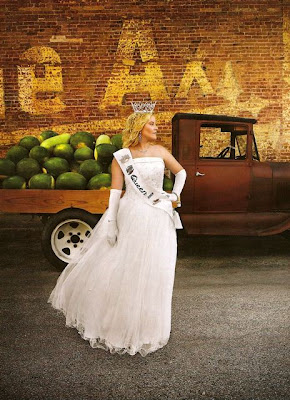 Former Goree residents Monte and Della Stuart are the great grandparents and Monte Faye is her grandmother. This picture of Ravana is in the September Texas Monthly. Monte Stuart worked for Toronto Pipeline back in the good old oil boom days.
Posted by Tammie at 7:41 AM No comments: Links to this post