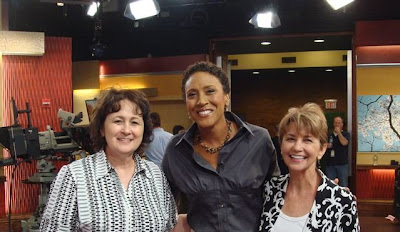 ROBBIN ROBERTS ROCHA TURNED 50 IN NEW YORK CITY!
Posted by Tammie at 6:23 AM No comments: Links to this post

David was born January 7, 1953 in Paris, Texas and raised by his mother and father, Vergue and Johnny Reagins and passed away June 16, 2009 at the age of 56. He graduated from Goree High School in 1972. While in high school, he was an outstanding athlete, participating in track, basketball and football. He played on several state championship football teams wearing jersey number 20. Later in life, he enjoyed tennis as a hobby. David entered the U.S. Army in 1972 where he served as a military police officer and ended his military service in 1975. David moved to Los Angeles, California in 1976 where he met his wife, Sonia. They were married for 32 years. A beloved son, David Allen II, was born to this union. David was employed by the County of Los Angeles, Department of County Counsel for 28 years.

The funeral, held at a church a short distance from his home, was uplifting. David was so loved by all who met him. The service was closed casket with a huge photograph of David displayed on an easel, and the middle pages of the printed service were covered with candid shots of him with his wife and son. The pallbearers were his brothers and a cousin, Billy Richardson. After an organ prelude and prayer, David's son's girlfriend sang "His Eye is on the Sparrow." The acknowledgment from the sisters and brothers saluted a 'true Goree Wildcat." A video presentation of David with friends and family on trips and in a range of activities brought laughs, smiles and tears.

Two-minute remarks were allowed and the first speaker was David's boss who described David as an indispensable positive can-do employee who was "if not the most popular, one of the most popular" persons in the County Counsel's office, and he had the large number of co-workers in attendance to stand to attest to that fact. Young people spoke about what a terrific role model and "uncle" he was. Others told of the many good times they had with David at get-togethers or on trips. Everyone had something amusing, heartwarming or funny to say. One of the speakers related his first meeting with David. Having heard that David was throwing a "fight party" for friends to come to his home to watch a boxing match, he showed up at David's door with "refreshments" and said, "You don't know me, but I really would like to watch the fight." David invited him in and introduced him to the group: "I'd like you to meet my good friend -- what did you say your name was?" It was the start of a long and beautiful friendship. David was eulogized by a long-time friend who reminisced about David's jokes, fashionable dressing, his special lemon chicken dish, and the many, many good times.

We miss David so much. You were always laughing if David was around. He was charming and engaging. He had the good looks of Denzel Washington and the jokes of Richard Pryor. He was an entertainer, a wonderful host, a caring brother. He leaves a hole in our hearts impossible to fill.
Posted by Tammie at 9:40 AM 1 comment: Links to this post

Rebecca Green Horry, age 59, passed away Saturday, July 11, 2009 in a Bakersfield, California hospital after a brief illness. She was a former resident of Goree, Olney, and Wichita Falls, Texas.
Becky was born on November 15, 1949 in Seymour, Texas to Dewitt and Marion Lee Kinser Green and grew up on the family ranch near Goree, Texas. She was a 1968 graduate of Goree High School, a Baptist, and worked as a health care provider most of her adult life.
She was preceded in death by a son, Stephen Bryan Horry, her parents, Marion Lee and Dewitt Green, and a brother, Jackie D. Green.
Becky is survived by her brother Dickie Green (Peggy) of Magnolia, Texas, nephews Wade Green (Shelly) of Crowley, Texas, Justin Green (Michelle) of Frederick, Oklahoma, great-nephews Brenden and Kyle Green of Crowley, Texas.
Posted by Tammie at 7:45 AM 41 comments: Links to this post