Here is an interesting email that I received this morning. Just have to share....awhile ago I joined the Diva's and apparently Ms. Cornell is a member, as well. Thus our common interest sparked a conversation about her connection to our hometown.

How cool! Yes, all of those names and stories are familiar to me. My husband is the one that is actually from Goree. I hear such wonderful stories about Doc Taylor, as they call him. My mother-in-law was a Coffman and I’ve been really interested in their heritage lately and how it fits into the historic aspect of our town. I’m trying to get several landmarks on the historical registry. We just bought the bank building where the drug store and office spaces once called home and plan on renovating it into an office space and hunting lodge. As a matter of fact, the structure got a new roof last week. I’d love to hear your remembrances. Do you have any pictures? I’m interested in the theatre and skating rink, etc. I would like to share our conversation on the Goree blog, as there are many who may be able to fill in the blanks for you.

I saw your address as Goree in Knox County . My aunt and uncle lived there from 1906 forward. He was Dr. William Taylor and she was Bettie Madole Taylor and taught 6th grade. His office was behind the drug store. Doris (a man) was the pharmacist. Jack Hampton lived across the street from Uncle Willie and Aunt Bettie. I can't remember the next door neighbor's name, or Clarence's last name who leased the farm. I'll think of more later or maybe their full names will float up.

See What Knox County Is Up To!!!

Remelle has updates on the affairs in and around us. First go see what Remelle, our county economic director, said about our Homecoming by clicking HERE. Then go HERE for the rest of the happenings in and around Knox County. Things are still hoppin'.

As a matter of fact, Mr. Greg Fix called last week. He and his wife

bought the Lois Moore house and they called to let me know that they closed the deal. They were attracted to this house due to the fact that it reminded them of their childhood homes. They won't be moving and working (from New Mexico) here until their daughter graduates from High School in May. He also let me know that they were renting the former Peek's Service Station for his real estate office. Which is ironic considering it was an online article about 'last' service station closing that pricked their hearts and caused them to even look Goree's way.
Posted by Tammie at 7:41 AM No comments: Links to this post

The picture is in the Goree Barber Shop and, if we figured correctly that Tuffy is about 10 years old, it was made about 1941.

Eva (McSwain) Pechacek gave the picture to Jackie (Latham) Styles at the Goree Homecoming. She knew that Tuffy, her brother, is the boy in the front chair and that George Crouch is the front chair barber. I borrowed the picture from Jackie, scanned and cleaned it some, and sent it to people that remember the 1930s and 1940s. Others came up with the name of the back chair barber, Tom Cowsar. Several were sure that the person in the back chair was one of the Moore boys. I cut the heads out of a 1943 Moore family picture and sent it to others to confirm that the back chair person was Nealie Moore. I then placed date/names on the picture.
Posted by Tammie at 10:27 AM No comments: Links to this post

Don't forget to stop the blog song player at the very bottom of the page, or else two songs will play at the same time while watching this video...

Posted by Tammie at 7:43 PM 2 comments: Links to this post

Our prayers are with you...John Wayne and Barbara

Christopher Wayne Harris, 32, was born July 1, 1976 in Abilene to Gary Harris and Laura Hale Harris and was welcomed into the arms of Jesus on Friday, November 14, 2008.He attended school in Abilene including Cooper High School before moving with his family to Fort Worth in 1996. He accepted Christ as his savior when he was a child and faithful member of Elmcrest Baptist Church where he was baptized by T. C. Melton and loved singing in the children's choir. Chris had a very passionate spirit, an easy laugh, caring eyes, and a quick wit and loved a practical joke. He was an avid fan of The Dallas Cowboys and The Texas Longhorns but his favorite thing was spending time with his family, especially Christmas Eve at Big John and Honey's house. He was a very affectionate person who never missed an opportunity to say "I love you".

On January 24, 1997 Chris married the love of his life, Bobbye Nell Lester, in Fort Worth. They have three children, Zachary Lynn, 11 years old, Zane Christopher, 10, and Zoye Annell, 7. Chris was a loving husband and a devoted father and was dearly loved by his family. Chris lived a lot of life in his thirty-two years. In January 2008, he suffered a stroke but as with other challenges in his life, Chris was a fighter and overcame virtually every symptom of his stroke. One day shortly after the stroke the doctor's said Chris would probably not live through the day, but he and God had other plans. Chris had a very happy and healthy ten months following the stroke. He had taken to clapping his hands and saying; "cool, cool" over any excitement.Chris had recently moved back to Abilene where he went to work for Tejas Properties Construction, immediately proving himself a quick study, a beloved co-worker, and a true asset. In prior years Chris had worked in the plumbing industry and since 2000, had been very involved with Teen Challenge Ministries. It would be Chris' wish that the Lord use his life and death to accomplish many good things, bring honor and glory to His name, and lost souls to Jesus.

He is survived by his wife, children, and parents, two brothers, John William Harris and wife, Becca, of Humble, Texas and Michael Paul Harris of N. Richland Hills and one sister, Caitlin Rebecca Harris of N. Richland Hills. Grandparents John Wayne and Barbara Harris of Abilene, Charles and Ollie Hale of McKinney, Texas and Richard and Velda Price of Centerville, Texas. He is also survived by aunts and uncles Scott Harris of Keller, Texas, Scott and Cathy McCleary and David and Paige Hale of Abilene, and Alan and Laurie Hale of Canadian, Texas. He is also survived by numerous cousins and many, many friends.

Services will be held at Broadview Baptist Church Tuesday, November 18th at 2:00 p.m., with burial to follow in Elmwood Memorial Park Cemetery. A visitation will be held from 5:00 to 7:00 p.m. Monday, November 17th at The Hamil Family Funeral Home, 6449 Buffalo Gap Rd.

The family suggests that memorials be made to Teen Challenge, 3850 South Loop 1604 West, San Antonio, Texas, 78264; or to the donor's favorite charity.Guest Registry and Obituary online at:www.HamilFamilyFuneralHome.com.
Posted by Tammie at 3:04 PM No comments: Links to this post 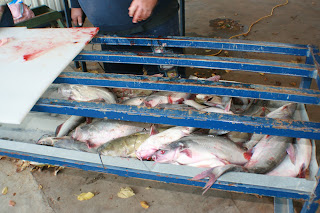 This was the first day's catch. The second day was almost that good. And the third was a bit less. And I'll never tell what they used for bait! 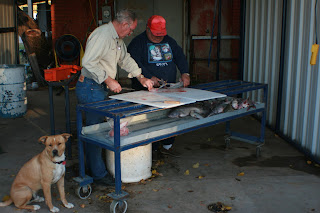 These two fellas stayed in Goree at 'A Place To Stay' for three nights and had themselves a big time. Catfish galore! These guys became aquainted in the oilfield business and are now lifelong fishing buddies. 'Grumpy', who is on the right, was on a road trip and decided to check out the lake while passing through. After seeing the huge heads on the fence posts, he decided to tell Floyd about it and they planned their next fishing adventure at Miller Creek. They'll be back and they will be telling others about their new found fishin' hole. And I'm hopin' they'll put in a good word for the lil' cabin.
Posted by Tammie at 6:52 PM 1 comment: Links to this post