Dale was born Nov. 22, 1915 in Virgil and Elsie (Juergens) Redding in Minatare, Neb. Dale was a farmer, rancher, cattle feeder and Master Cattleman in Nebraska until 1966. He established a renowned herd of purebred Angus cattle and was one of the top Angus breeders in the world during the 1950's and 1960's. Dale was a farmer and later an oil producer in North Texas from 1968 until 1995.

Dale was preceded in death by his parents, first wife, Louise; brother, Robert in World War II; and a sister at birth.

Dale's family will gather at a later time for a memorial service.
Memorials may be made to Hospice of Wichita Falls.
Tributes may be sent to the family at www.lunnscolonial.com
Posted by Tammie at 8:19 AM No comments: Links to this post

Well, the upstairs structure above the City Hall and the garage sale are now emptied of their contents. And they aren't so scary anymore! We have dreams of using these structures now that they have a new roof. New windows, electrical and bathrooms are next steps. The dream is for this to be turned into lodging. Try these on for size..."The City Lodge" or how about "Lake Creek Lodge"? All proceeds will be for the upkeep of the Memorial Building, etc. The vision is for the rooms (7 or so) to be filled with antiques that one could purchase if the hankerin' should hanker.

Thanks to those who got their hands dirty~you know who you are!!! And yes I know, we got a lot more than our hands dirty~but it will be well worth it!

Posted by Tammie at 7:28 AM 2 comments: Links to this post

Copied and pasted from the Wichita Falls Times Record News:

SEYMOUR — Ann Lain, 81, died Wednesday, Oct. 10, 2007, in Wichita Falls. Services will be at 2 p.m. Saturday at the Red Springs Baptist Church, with the Rev. Gary Godkin, pastor, and Rev. Genoa Goad officiating. Burial will be in Masonic Cemetery under the direction of Seymour Memorial Funeral Home.

Visitation will be at 6:30 p.m. today at the funeral home.
Memorials may be made to Hospice of Wichita Falls or to the Seymour Cemetery Association.
Posted by Tammie at 6:38 AM 1 comment: Links to this post

The Memorial Building garage sale building now has a new roof. But, what good is a new roof with mildewed merchandise. Soooo, last week we had a big, black bag sale. People were invited to fill a black bag for only $5.00, cheap~cheap~cheap. (It beat throwing it in the dumpster.) We even had one patron fill a suburban!!!

We have future plans for this structure! If the building is not leased by a company who builds cabinets, then we will begin plans for a new and improved thrift/antique store to benefit the Goree Memorial Building. Leasing or thriftstore, either way, proceeds will go towards the upkeep of the Memorial Building.

A big huge thanks to those who worked!!! Some baked for the bake sale, some sweat and swore while cleaning up, then again, some did all of the above. It was a huge job, but the benefits were worth it.
Posted by Tammie at 8:15 AM No comments: Links to this post

Al DeLuna passed away this morning. He was a bright spot in everyone's day here in Goree. He had been fighting cancer and awhile back moved to the nursing home. He took a turn for the worse yesterday and went to be with Jesus this morning. We'll miss him dearly.
Posted by Tammie at 7:18 AM No comments: Links to this post

Does our downtown need a makeover??? 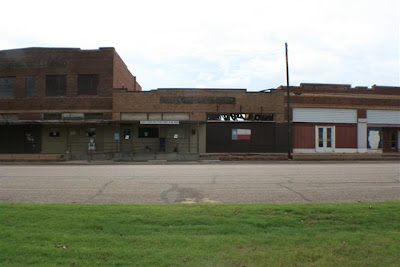 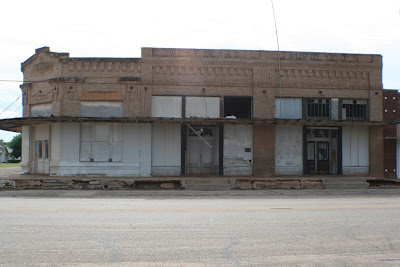 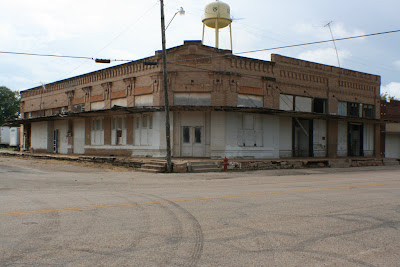 Posted by Tammie at 6:45 AM No comments: Links to this post

View/Sign Guest Book
94 Years Young Captain John Thomas Peek, of Solana Beach, Calif., passed away on September 21, 2007. Graveside services will be held at 11 a.m. Monday, October 1, 2007, at Maple Hill Cemetery. Family gatherings will be from 4-6 p.m. Sunday and 10-11 a.m. Monday at the Maple Hill Funeral Home. Captain John Thomas Peek (J.T. to his family) was born on June 11, 1913, in the home of his family farm in Goree, Knox County, Texas. John enlisted in the Aviation Section of the USMC in 1933 and began flight school in 1936 in Pensacola. He was transferred to San Diego Naval Air Station in 1937 for three years of active duty, where he immediately qualified on the carrier and was eventually promoted to Captain. He flew many different aircraft, including Army Air Corps P-51 Mustangs, and once flew 11 different planes in one day. John qualified Charles Lindbergh in the Corsair. In 1940, John left the Marines to become a TWA pilot, flying the DC-2. During his career with TWA, he served an additional three years in the USMC during WWII participating in soldier and supply transport flights, mostly in the southwest Pacific Theater. He was awarded Good Conduct; American Defense Service, Presidential Unit Citation. He returned to TWA after WWII while still serving in the USMC Reserve until 1952, reaching the rank of Major. During the Vietnam War, he again served his country by transporting soldiers in and out of the country as a TWA pilot. He retired as a TWA International Captain after 33 years of service, completing his TWA career flying the "latest and largest" plane of the time - the 747 Jumbo Jet. He accumulated 25,000 hours and approximately 8 million miles of flying time. Survivors include a sister, Dimple Jetton, Spearman, Texas; a daughter, Vickie Peek, Solana Beach, Calif.; three sons, John T. "Jet" Peek, Jr., Houston, Texas, Randy Peek, K.C., Kan., Gary Peek, Solana Beach, Calif.; two grandsons, Ryan Peek, Logan Peek, and a great grandson, Troy Peek, all of K.C, Kan. (Arr.: Maple Hill Funeral Home, 913- 831-3345).
Published in the Kansas City Star on 9/29/2007.
Posted by Tammie at 6:53 AM No comments: Links to this post