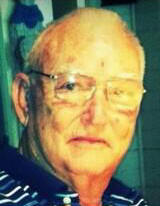 Condolence messages may be left online at www.duttonfuneralhome.com.

Posted by Tammie at 6:01 AM 2 comments: Links to this post