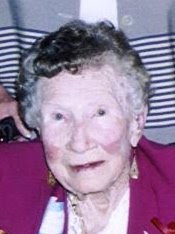 (Obit from the Wichita Falls Times Record News)
Monday, December 8, 2008
GOREE, Texas — Dimple Jetton, 100, of Spearman died Friday, December 5, 2008, in Hansford Manor in Spearman, Texas.
Services will be at 2 p.m. Tuesday, December 9, 2008, at the Goree First Baptist Church with Genoa Goad officiating. Burial will be in the Goree Cemetery under the direction of McCauley-Smith Funeral Home in Munday, Texas.
Mrs. Jetton was born April 17, 1908. She celebrated her 100th birthday this year. She was a homemaker and a member of Goree First Baptist Church. She moved from Goree to Spearman in 1985. Dimple and Sam B. Jetton were married May 26, 1946, in Munday, Texas. Mr. Jetton died February 14, 1983.
Survivors: one daughter, Lynell Williams of Spearman, Texas; two grandchildren, Lynette Babcock of Mineral Wells, Texas, and Kevin Williams of Goodwill, Oklahoma; one great-granddaughter, Kaitlyn Babcock of Mineral Wells, Texas; several nieces and nephews.
Click here: Dimple Jetton dies at 100 : Obituaries : Times Record News
Posted by Tammie at 8:53 AM